Amigas with Benefits is a short dramedy about an elderly bride-to-be, Lupita. She is finally living her truth and is on the verge of marrying her love, Ramona. But on their special day, an uninvited guest rudely disrupts the ceremony. It takes moral courage and a far-fetched plan for the couple to find a way back to their freedom to be happy.

Adelina Anthony (writer-director-producer) of Amigas with Benefits is an award winning two-spirit Xicana lesbian multi-genre artist whose career spans over 20 years. She transitioned into filmmaking in 2012, when along with her wife, Marisa Becerra, she co-founded AdeRisa Productions. Their first short film, "Forgiving Heart," premiered at the 2013 Outfest Fusion Gala. That year Adelina participated in Film Independent’s Project Involve, and penned, "You’re Dead to Me"; it became an award-winning short film (2014 Imagen Award). In 2014 she participated in the Sundance Intensive Writers Workshop and directed her first feature, "Bruising for Besos," which world-premiered last year at Frameline. Last year she was also invited to write another short film for Project Involve and delivered, Get the Life, which is currently finding much success on the festival circuit.

Q&A on the Film

Amigas with Benefits tells a familiar story of coming out through the eyes of an elderly subject. Writer, Producer and Director Adelina Anthony spoke with PBS about why she chose to tell her story from this point of view. 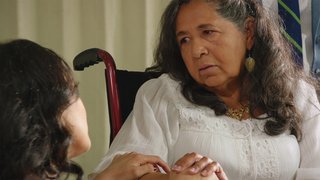 Read the Full Q&APBS: There’s an interesting switch here from the stories that we hear about more often: someone of an older generation, more traditional, looking down on a gay youth. Here we see the reverse situation when the daughter opposes her mother’s same-sex marriage. Why did you choose to tell the story from this point of view?

Adelina Anthony: As a Xicana lesbian writer I’m always asking myself, "What kind of queer stories have I not seen on screen or on stage?" And by queer stories I’m also thinking about the Latinx protagonist/lead characters that I want to see driving the story.  So if you look at mainstream LGBTQ and mainstream Latino/a stories, it leaves writers like myself with lots of room to explore. But the story challenge isn’t just about putting brown bodies where white and heterosexual bodies have historically occupied literary, theatrical or cinematic space — for me, the challenge is to tell a story we think we know in an altogether unique way.

So, yes, in the typical coming out story, it’s an older traditional person looking down on a gay youth or young adult. But the truth is that people find their inner strength to come out at all ages. So when I combined 1) the insider knowledge of knowing Queer/Trans People of Color (QTPOC) who have come out much later in life and 2) the constant erasure in our society and media of our elders of color (especially queer)… the seed of Amigas with Benefits was planted.

I knew my protagonist, Lupita, was going to be a Latina lesbian elder who had been living in the closet almost all of her life. But living a lie has deep repercussions, and the story touches upon this. Even though Lupita’s daughter is written as the foil, and we had fun portraying her as a pseudo telenovela-esque character, her adult daughter is ultimately the consequence of Lupita’s closeted lesbianism over many decades. I have deep compassion for both of them. Ultimately, I hope it gives us all a chance to reflect on our learned homophobia, and to think more about marginalized peoples in our Latina/o/x and LGBTQ communities. To see the ill effects of asking people not to live their truth.

Latino Public Broadcasting is the leader of the development, production, acquisition and distribution of non-commercial educational and cultural media that is representative of Latino people, or addresses issues of particular interest to Latino Americans. These programs are produced for dissemination to the public broadcasting stations and other public telecommunication entities. LPB provides a voice to the diverse Latino community on public media throughout the United States.