Kymone Freeman believes that everyone has a story to tell. At We Act Radio, the radio personality and activist cultivates the authentic voices of Anacostia, his historically black and underreported Washington D.C. neighborhood. Like Kymone’s hero Frederick Douglass, “The Lion of Anacostia,” the community holds strong in the face of gentrification and displacement.

Joanie Tobin (Lead Producer) is a documentary producer and videographer. She directed and produced the Finding America video series for AIR and WORLD Channel and is currently a producer at Bustle and Elite Daily.

Josh Banville (Video Editor) is a director and editor who has devoted his career to films addressing human rights issues. He is currently editing and directing his first feature documentary about the life of Clarence Jones, former attorney, speechwriter and friend of Martin Luther King Jr.

Aidan Un (Field Producer) is an independent filmmaker. Soon after arriving in Philadelphia from France in 2007 he found video as a way to discover the city and the people around him. He now creates stories and images he hopes will make people look again. 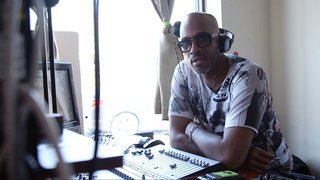 PBS: How did Kymone Freeman come to be the subject of your story?

Katie Davis: I was beginning to research the neighborhood of Anacostia. As I was walking down the main road, Martin Luther King Boulevard, I noticed a storefront labeled We Act Radio. Being a longtime lover of radio, I knew I wanted to talk to the manager. It took several calls and a few nudges from neighbors for Kymone Freeman to call me back. We met for lunch and we clicked.

About WORLD Channel and AIR Media

AIR is a vibrant international network of 1,200 makers powering public media and podcasting. Since 2010, AIR’s national incubator, Localore, has engaged more than 400 independent, community, and radio and television station-based producers creating work that spans digital, broadcast, and street media platforms, challenging and inspiring other media makers to join in at AIRmedia.org.