50 years after a gunman opened fire at the University of Texas in Austin — the first recorded mass shooting in U.S. history and subject of the Independent Lens film "TOWER" — students can now carry handguns on campus. Proponents of the law, affecting all public universities in Texas, argue an armed student body could help prevent other mass shootings, but many others worry about its ramifications.

Joanne Elgart Jennings is a freelance filmmaker based in San Francisco and a producer and special correspondent for the PBS Newshour. From 2011-2014 she was the executive producer for news and current affairs programs at KQED in San Francisco, where she created, launched and managed the weekly “KQED Newsroom” and supervised production of a range of local and national documentaries, including “Sound Tracks: Music Without Borders” for PBS. Jennings began her career as a producer for the CBC. She went on to become a producer for more than a decade for the PBS Newshour, covering Hurricane Katrina, the Deep Water Horizon oil spill, the Kosovo war, the Haiti earthquake and the Arab Spring, among many other stories. She produced the short film, “Guns on Campus,” to air following the broadcast of the documentary "TOWER" on Independent Lens and to appear online on several news sites.

Q&A About the Film

Producer Joanne Elgart Jennings spoke with PBS about Guns on Campus, taking us behind the subjects featured in her film and how she hopes this will impact discussion surrounding campus carry.

PBS: During this short, you interview individuals from the University of Texas at Austin, where the first mass school shooting occurred in 1966. How did you find the subjects for your film and what was the decision in featuring these specific individuals? 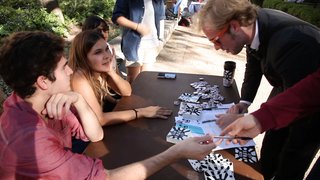 Joanne Elgart Jennings: I wanted to find engaging, sympathetic and credible characters on both sides of the issue. I saw a video of Nick Roland participating in a debate on campus from his vantage point as someone who had lived through the Virginia Tech mass shooting. That fascinated me and I wanted to talk with him.

As one of the leaders of Students Against Campus Carry, Ana Lopez was behind the “Cocks Not Glocks” protest, making the point that it’s illegal to openly brandish a sex toy in Texas, but that guns can be carried and displayed. That protest had gotten media attention. Ana provided a passionate voice to represent students worried about guns on their campus.

I also wanted to tie the current debate to historic events, so we talked with a few people who witnessed the first mass shooting in U.S. history at the UT Tower in August, 1966. Ramiro Martinez stood out. He had spent a long career in law enforcement after he helped bring down the Texas sniper in 1966.

ITVS is a San Francisco-based nonprofit organization that has, for over 25 years, funded and partnered with a diverse range of documentary filmmakers to produce and distribute untold stories. ITVS incubates and co-produces these award-winning films and then airs them for free on PBS via our weekly series, Independent Lens, as well as on other PBS series and through our digital platform, OVEE. ITVS is funded by the Corporation for Public Broadcasting.