On the verge of her mother’s death, Addie returns home to shed light on her dark past amidst the wreckage collected over twenty years.

Sam Fisicaro is a wife, mother of three boys, and an actress based in Louisiana. Sam began her study of acting in high school and continued through college, culminating in a Performance Concentration degree from the Theatre Department of Louisiana State University. While beginning and raising their family, Sam continued to devour every actor's biography, acting technique, and book she could get her hands on. Consistently writing, researching and taking classes, as well as private coaching, Sam has studied with a quiet but intense focus since she was fifteen years old. But it wasn't until 35 that she finally found the courage to pursue acting as a career. Sam has remarked that everyday since then has been filled with the thrill of fearlessly stepping forward in faith.

Jency Griffin Hogan, originally from Baton Rouge, Louisiana, acted is Los Angeles for eight years before returning to, once again, take part in Louisiana’s thriving film community. She loves both acting and creating her own content. Jency’s first production was a short film called Painted Parakeets. In pursuit of her passion for period drama, she then produced films such Madeline’s Oil, With My Soul, and The Verses. Last Light is Jency’s most recent film, where she served as director and co-producer.

PBS spoke with Executive Producer and Actress Samantha Fisicaro about the symbolism of photography in the moving film about life and death, Last Light. 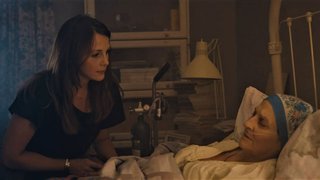 Read the Full Q&APBS: This is a raw story about a hostile mother-daughter relationship after the death of the main character’s father. How did the role of photography get introduced into the storyline during the early writing stages of this film?

Samantha Fisicaro: A raw story, indeed! Photography played a few different roles. Young Addie longs to feel the presence of her recently deceased father, and his treasured cameras were a way for her to do that. The role of photography also provided us with a poignant juxtaposition. Photography, at its' most elementary, is a method of preserving ones surroundings. In our film, the mother rejects the daughters need to have access to the cameras, but herself deteriorates into a life and home of all the "stuff" that's accumulated via her own need to preserve her surroundings.

Louisiana Public Broadcasting (LPB) is a state network of six non-commercial, public television stations licensed to the Louisiana Educational Television Authority (LETA), established in 1971 by the Louisiana Legislature. The Mission of Louisiana Public Broadcasting is to provide programming that is intelligent, informative, educational and entertaining. LPB strives to connect the citizens of Louisiana by creating content that showcases Louisiana’s unique history, people, places and events. In addition to the programs that LPB produces, such as our weekly newsmagazine, Louisiana: The State We’re In, and our catalog of documentaries about the people, places and issues of importance in our state, LPB airs quality national programming. We air news programs such as PBS NewsHour, mainstay children’s shows like Sesame Street, home improvement programs including the This Old House Hour, as well as British comedies such as Keeping Up Appearances, and much, much more.