In this animated story, motion graphics designer Philip Ashby brings to life the words of Steven Rodriguez. While enrolled in the First Wave Hip Hop arts program at UW-Madison, Rodriguez composed a poem inspired by his younger brother, “Little Man.” He speaks to his brother’s struggles with discrimination as a Mexican American and tries to infuse his brother with a sense of hope for the future.

Steven Rodriguez wrote and performed Little Man as a First Wave Scholar at the University of Wisconsin-Madison. The First Wave Scholarship Program helps students develop their artistic interests of hip hop and spoken word while pursuing their academic and career goals. As a scholar, Steven developed and facilitated workshops and events on social justice issues.

Philip Ashby directs and creates animated stories for Wisconsin Public Television. Philip attributes his storytelling interests to his parents whom shared fascinating stories of their lives over the kitchen table.

Little Man highlights the power of visual and performance arts with Steven Rodriguez's story and Artist and Animator Philip Ashby's animation. Philip spoke with PBS about his specific animation style and why this story is important to hear. 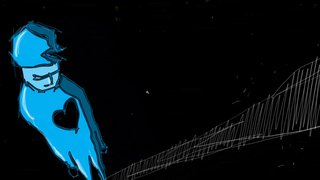 PBS: Steven Rodriguez shares his story, inspired by his younger brother, in the form of spoken word poetry. Can you take us through your creative process and your initial thoughts on how you wanted to illustrate this?

Philip Ashby: My creative process usually starts in my sketchbook. After I hear the voice track or read the script, I start doodling and what usually flows through my pencil is a character or a scene that evokes the atmosphere of what I experience with the piece. Once I have a sense of the art direction I create a storyboard which helps me think about scene transitions and the flow of the visual story. Then I create an animatic, which is a rough draft animation. This helps me time the art with the voice track and gives the art a sense of life.

Finally, I go in to edit which is literally evaluating every frame; this stage eventually comes to an equilibrium of art and sound with storyline. My initial reaction to Steven’s performance was feeling his isolation, frustration and desperation. I knew right away I wanted to use a sketchy hand-drawn animation style that wiggled and vibrated with a sense of unease. I also wanted the art to be urban much like street art. There’s an honesty and beauty to street art that I admire and wanted that to surround Steven’s story.

When WHA-TV signed on the air in 1954 it was the first educational station in Wisconsin and the fifth in the United States. WPT built an impressive track record of creating, curating and pushing out top notch content on highly relevant issues. Then as now, WPT seeks to inform Wisconsinites about news and issues affecting the state’s communities, as well as to feature the state’s history, arts and culture. After 60 years of innovation in public media, WPT‘s community service mission continues to drive its evolution. WPT employs expanding technological resources to broaden accessibility, steadily increasing digital capacity to produce essential and valued content in ways that audiences wish to access it—on the air and online. WPT has established itself as a trusted convener of audiences and community partners. Roughly 1.3 million viewers throughout the state tune in to WPT each month making it one of the highest ranked public broadcasting stations in the nation.