A girl, struggling to get by, decides to take a chance and help someone less fortunate. Through her journey, she discovers her new friend may hold the key to a new way of thinking.

John Barber IV is a filmmaker and student currently pursuing a Bachelor of Science in Television and Digital Media Production at Ferris State University. He became interested in television at Walled Lake Western High School where he was an integral part of the TV/media production crew. Since then, he has been a producer, director, editor, actor and cinematographer on a variety of projects.

Periphery's Director John Barber IV and Director of Photography Mariah Iltis spoke with PBS about the inspiration for their work, and the significance of their film's conclusion.​ 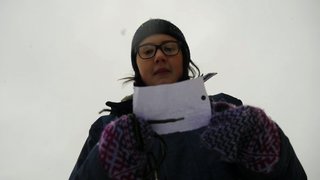 Read the Full Q&APBS: What was the inspiration behind this story?

Mariah Iltis: For me the inspiration was from a video I had seen on Facebook. It was a social experiment where they had asked people walking down the street in, I believe it was New York, what they wanted for Christmas. Most of them said something material like a gaming system or certain types of clothing. They then asked the homeless of New York what they wanted for Christmas and, across the board, every one of them said they just wanted a person that would sit and talk with them.

John Barber IV: My inspiration behind this story was based off experiences I have personally seen as going through a mundane day every day. To me some of the best things in life are right in front of us, but we are blinded by our own lives that we miss them. In this film I wanted to show that change and how it can influence someone's life.

WTVS Detroit Public Television is the viewer-supported PBS member station serving the nation's 11th largest television market. We operate our television services from the Riley Broadcast Center in Wixom, Michigan, named for the lead donors to our Capital Campaign, George and Dolores Riley. We operate a radio station, WRCJ 90.9 FM, in partnership with the Detroit Public Schools at the Detroit School of Arts; a Midtown TV studio in Detroit in partnership with Wayne State University; and our Detroit Bureau is located within the Detroit Historical Museum. Our vision is for a community in which people trust public media to help them discover new ideas, make informed decisions, and enjoy enriched lives. Our digital subchannels offer additional scheduling of public TV programming on 56.4 WORLD channel, how-to and travel programs on 56.3 Create, and children's programming on 56.2 Detroit PBS KIDS. Detroit Public TV is notably active in the community producing local programs that showcase arts, culture, news and analysis; and educational outreach campaigns that use the power of media to provide knowledge and understanding.