What does a goat with a fishtail look like? Or a monkey with wings? Sarina Brewer imagines these extraordinary creatures and creates them in her hybrid sculptures. A founding member of the Rogue Taxidermy movement, Brewer’s work draws on her love of natural history and mythology. Imperative to Brewer’s process is the fact that no animals are killed for the purpose of her artwork.

Kate McDonald is a multimedia producer based in the Twin Cities. Her work has been featured on PBS NewsHour, Entertainment Weekly, and National Public Radio. At Twin Cities PBS, she works for the award-winning weekly art series "MN Original." Outside of TPT, she recently produced the feature length film, “The Seeker”, written by the band Cloud Cult and starring Josh Radnor ("How I Met Your Mother"). She’s the proud recipient of five Regional Emmy Awards.

Ryan Klabunde has primarily made his career as a television series editor. His series work has been featured on major networks including PBS, ESPN, ABC, HGTV, Food Network, and TLC. For nearly 10 years Ryan has worked with Twin Cities PBS on a variety of television series ("Dragonfly TV," "SciGirls," "MakeTV" and "MN Original") earning him three Daytime Emmy nominations and five Regional Emmy Awards.

Bringing fantastic ideas into fruition is Sarina Brewer's passion in this short documentary. Director and Producer Kate McDonald and Director, Producer and Editor Ryan Klabunde answered some questions about her particular type of artwork and what drew them to her story. 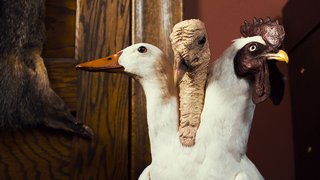 PBS: Sarina has a way of making taxidermy look quite beautiful through her work, and she mentions that rogue taxidermy is a form of fine art. What do you hope viewers will take away from this in regard to this type of artwork as a whole?

Kate McDonald: I love art that tests my pre-conceived notions and challenges me to think in different ways. I hope that Sarina’s work broadens viewers’ ideas of what art can be, and what materials can be used in the creation of fine art. Sarina’s work is a celebration of life and beauty within the context of death and decay and I find this juxtaposition to be incredibly fascinating.

Ryan Klabunde: Before stumbling across Sarina’s artwork I was only aware of traditional taxidermy, with the exception of the occasional poorly cobbled together jackalope. Seeing the unique creatures Sarina creates blew my mind as well as sparked my interest in learning more about the artist behind the work. After meeting Sarina and learning about her love of animals and how she uses her art to honor them completely changed the way I view her work.

Twin Cities PBS (TPT) is one of the nation’s leading public media organizations. Through the power of broadcast, digital, and local and national engagement, TPT advances education, culture, and citizenship to enrich lives and strengthen communities. TPT has been recognized for innovation and creativity throughout its 60-year history, receiving numerous Peabody, and national and regional Emmy awards. Based in St. Paul, MN, TPT is one of the highest-rated PBS stations in the country, reaching more than 1.3 million households each month through multiple broadcast and digital services. TPT’s areas of focus include: unleashing children’s love of learning; advancing STEM education; engaging first-stage adults; connecting communities to arts, culture and history; and serving the needs of America's aging population. MN Original is TPT’s arts and cultural series starring local artists. The state-funded series is available through World Channel on 195 public television stations in 37 states.