Tired of hearing Si complain about not having a puppy, her parents decide to compromise on their “no animals” rule by getting Si a goldfish. Bored with the goldfish, Si takes it upon herself to “improve” the life of the fish by adding decorations to its home. Once her imagination sets in, she is drawn into the fish’s own underwater world where she plays out lavish daydreams in a new perspective.

Samantha Smith is an award-winning writer and director based in New Orleans. She holds a B.A. in Film Directing from Columbia College Chicago. She is a member of Women in Film and Television (WIFT) and the National Association of Latino Arts and Cultures (NALAC). Her recent short film "THESE WILD THINGS," was awarded the Jury Award for Best LA Short at the New Orleans Film Festival. She has also received other honors such as: Best Film Short and Best Cinematography at the International Kids Film Festival in Brazil, Jury Prize at the Boston Film Festival and was also featured as The Short of the Month. Two of Samantha’s films have been distributed by KIDS FIRST!. Samantha's feature film in development, "LITTLE LYING WILD," is supported by the 2017 Tribeca Film Institute Network.

PBS spoke with Director and Writer Samantha Smith about her intentional use of color and the childlike feel of her playful film, Si. 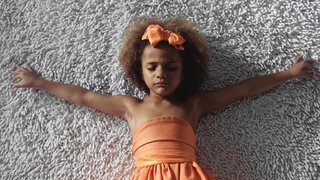 Read the Full Q&APBS: Color plays a prominent role here and you used the name Sienna for the young girl in this film. Can you explain the decision behind this?

Samantha Smith: Color is one of my favorite tools to tell a story. Her room is all white to symbolize the perfection seeking home owners (Si's parent) and their no-nonsense rules about no animals. This maybe isn't literally what Si's room looks like, but rather what it might look like in the point of view of a child who feels stifled. The orange dress is to connect her to the goldfish. The name Sienna has nothing to do with the color sienna. Actually, that's my roommate’s name who kind of inspired the whole film.

Louisiana Public Broadcasting (LPB) is a state network of six non-commercial, public television stations licensed to the Louisiana Educational Television Authority (LETA), established in 1971 by the Louisiana Legislature. The Mission of Louisiana Public Broadcasting is to provide programming that is intelligent, informative, educational and entertaining. LPB strives to connect the citizens of Louisiana by creating content that showcases Louisiana’s unique history, people, places and events. In addition to the programs that LPB produces, such as our weekly newsmagazine, Louisiana: The State We’re In, and our catalog of documentaries about the people, places and issues of importance in our state, LPB airs quality national programming. We air news programs such as PBS NewsHour, mainstay children’s shows like Sesame Street, home improvement programs including the This Old House Hour, as well as British comedies such as Keeping Up Appearances, and much, much more.